A view of the land no one else can comprehend and a perspective on life that few can appreciate begins with the working partnership between a man and his horse. I can’t think of many occupations that offer this anymore. Back-country outfitters, mounted policemen, and cowboys are the only ones left in modern times. Why sure, there’s an entire equine industry that employs thousands of people, involves hundreds of thousands of horses and millions of dollars, but these man-horse relationships aren’t the working kind. Racing, rescuing, showing, breeding and training horses is a wonderful way to make a living-and it is certainly work!- but it’s not exactly what I mean.

I mean the sharing of everything, from success to failure; harsh weather conditions, youth and old age, injuries, proud moments and shameful mistakes. Men and horses who work together know from direct experience the value of compassion and grace, perseverance, a positive attitude, and even ambition. They also know the cost of carelessness, of a bad temper, and laziness…and all this they have learned from each other. I’m not glorifying animals to being equal to human beings. But I would be the first to admit that horses are nearly always honest, and people would do well to learn what they can from them. That’s why men who live and work with horses, not as their project but as partners, are so unique in the world.

It strikes me as sad that almost everyone, except the very rich or very poor, had this kind of wisdom once. Now it’s such a small handful of folks, and the number is dwindling. Horses used to move everything and carry everyone, they were needed by mankind and now they’re not. Now, only a few people still need horses to get their work done. And the cowboy is one.

Cowboy work can’t be done without horses, and though modern methods and machines try all the time to make a hand, they can’t really hold a candle to even an average ranch horse. Thanks to the big budgets of commercial beef operations, cowboys all have pickups and trailers to haul their horses to the back side of the big pastures. (See a good article on the topic of mechanized ranching by my adopted sister here.) As a result, ranch horses now can retire at the age of twelve or fourteen instead of eight or ten. Despite using machines for some ranching tasks, this is still a hard line of work for men and horses.

When you were a kid and they told you to do something hard because it ‘builds character’, you resented the phrase, but now you know it’s true. It’s the same for horses. Wet saddle blankets (a cowboy term that means simply making a horse work) and long miles (covering country gathering cows, checking fence, or hunting in the back country) builds character in them. You can lope a horse in the sand for hours every day, and all you’ll end up with is green horse that is very fit. It’s when you challenge him to do something to help you, when you learn to depend on each other, that you create the conditions that will ‘build character’.

Ranch horses know their job. Most of them show a good deal of common sense and are what the horse industry calls ‘gentle’. Cowboys call it ‘broke’. One cowboy may take time with his horses and teach them what he expects of them, while another may just ask the horse to go to work and never even bother naming them. Some cowboys like their horses  ‘cowboy broke’ while others like to get them ‘ol’ man gentle’. Some will study and eventually become true horsemen, and some will be able to get on anything and ride it and never learn a thing more. Cowboys care about their gear (tack) for different reasons; some for the look and the statement it makes, others for how it fits their horse. And that may be the most telling thing when it comes to learning whether or not he truly works with a horse for a living day in and day out.

My husband’s two work horses, ‘Yeller’ and ‘Champ’, are both under the age of seven. They aren’t broke for women, kids and old men, but he would trust his life to them. Their manes and tails are matted most of the time, and neither one is real people friendly. Both of them are the horses some other guy didn’t want to ride. But, they hobble, tie, and shoe easily; load and unload from any trailer; and take pretty much anything in stride…just maybe not from the ground. Haven’t gotten either one to eat out of my hand yet, but they like my husband. 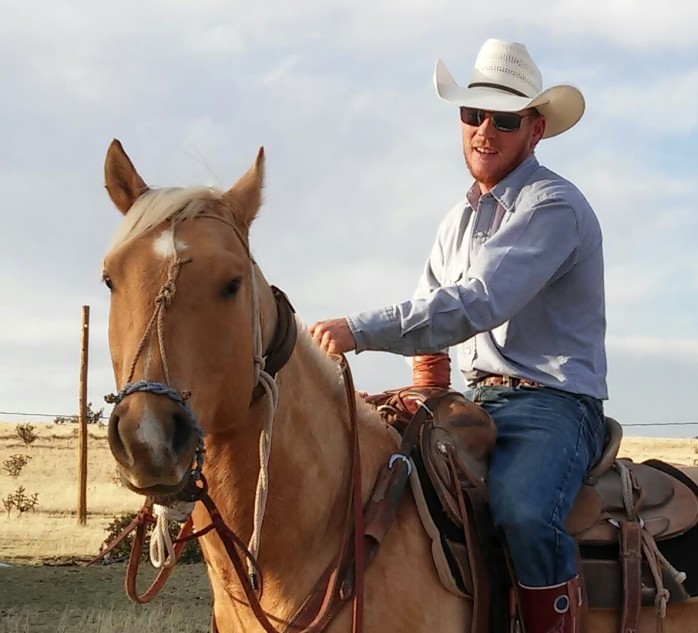 Yeller had to trust Cody to free his feet from a sheep-wire panel once; to nurse him back to health from a snake bite; and to get porcupine quills out of his nose. And in return, Yeller gives him all he has every time Cody asks. Champ has only been in the string for a few months, but already he has taken care of my husband in a dangerous situation when other horses might have panicked and gotten someone hurt. Both of them worked to get cattle out of the path of a grass fire, getting too close for comfort and breathing in more than their share of dust and smoke.

At the end of a long day that started in the dark of morning, when my husband unloads his horse, they’re both tired. Tired from doing the same work, the same way, together. They were partners and it took more than just energy out of them. He unsaddles, and hangs his wet saddle blanket on the rack where it can dry. He rubs his horse down, washes his back if it’s a hot day, and turns him loose with the others. The first thing the horse does is sniff the ground, his knees buckle, and he rolls. Then he goes to the water trough and takes a deep drink. And he throws up his head, ears erect, looking for Cody. Before my husband can take his boots off and stretch out in the recliner, he takes the time to feed his horses and tend to anything else they need. He’s beat. I can see it in his eyes and in his horse: both of them are sore and need some rest. But I also see the other things: the triumph and the trust, their inter-dependent sense of accomplishment and pride. One a master, one a servant, but which? Sometimes it’s hard to tell.

Maybe all this would be difficult to appreciate for one who has only ever used machines to get their work done. But since I know firsthand this blessing, I think the world could use more tired men with tired horses.